I want you to know that if your not happy with the way things currently are that it’s not your fault. We didn’t learn this stuff in grade school. The good news is, you can change this, and it can be fun!

That’s why I have created LIFT Your Language – a Fitness Program for your greatest barrier…your MIND!

HOW THIS CAME TO PASS

I’d been feeling frustrated – first with myself, then with people walking around the gym. I was tired of the negative vibes and the defeatest language I’d hear when people were challenged to push themselves although our trainer had signage reminding people to leave the negativities and whoa’s at home.

I was frustrated because – I used to be one of them –  but now, I had myself in a completely different mindset and wasn’t interested in subjecting myself to the negative energy or language. I was also bugged because I love people and it personally pains me to see people suffering unnecessarily.

You see, before I had the mind shift, I was a nay sayer with my thoughts and my language. In truth, I had gotten to the point where I felt like my glass was 80 percent empty, not even half full!

In truth, I was a bummer to be around

I couldn’t stand to be around myself and others felt it too although they were too nice to tell me. My inner roommate, that little voice in my head, was more critical than the Grinch and she was talking faster than Jim Carey in Liar Liar convincing me that I was broken, worthless, unlovable and not enough. At the gym and everyhwere else she was driving me crazy with the comparison language and negative self-talk

“Look at her, she looks great and comes here everyday, too bad you’re too lazy to do the same. If YOU could keep promises to yourself, you might be able to be that strong and healthy. Well, if you hadn’t been so stupid trying to teach that pony to canter, you wouldn’t have the shoulder problem. You always make bad choices; it’s your own fault. You will never be strong; you can’t get healthy if you can’t be physically active.” “What about that dumb move you made in Barr class where you tore your hamstring? You should have told that teacher no and used your voice but instead you let her push you around, push you down into those splits and now look at you. Well, even if you hadn’t made those bad choices, that ski accident where you didn’t ask for help took out your hamstrings a long time ago. Why didn’t you ask for help and see a doctor later? Maybe you just like to suffer. Maybe you just like to have problems so people can feel sorry for you. Or maybe you neglect yourself so you have an excuse not to show up in life or get other people to do things for you because you’re too afraid to ask. How disappointing you are! You will never be healthy and forget ever being fit again.”

On top of that, I was listening to my doctors who were also nay sayers, always suggesting surgery and negating my suggestions of rehabilitation through strength training.

In my core, I knew these guys were wrong but after 5 years of chronic physical pain, and an arm that tingled giving me only an hour a day to do my work, and after meeting with over 10 specialists in the areas of orthopedics, physical therapy, neurology, massage therapists and others, I had finally given up.

Not only physically but mentally as well. I think that’s when the negative self-talk reached its peak. I was always in pain; sleep deprived, and constipated from pain meds, living with migraines and in truth, a miserable human being. I ate well and took vitamins but the mindset stuff was crippling me. 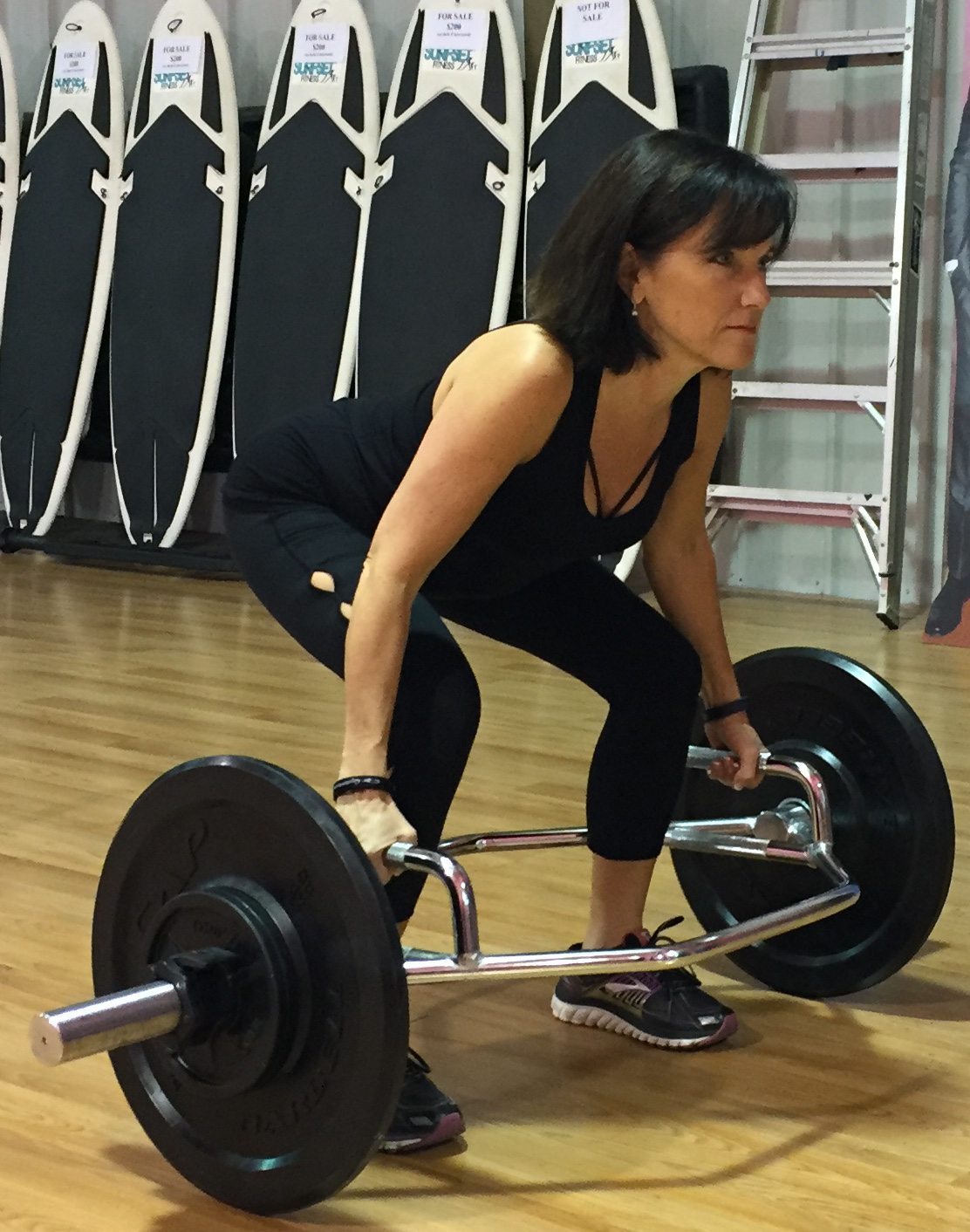 At 53, I still have some pain. But the pain I have now is 95% good (I lift and condition instead of sitting and whining) and the 5% pain left, I embrace as my driving force to stay committed to my goals.

Today, I feel alive – healthy, strong, and fit and if I have to say so myself, I look pretty damned good too.

Yeah, I have baby fat on my belly, still working on an occasional sugar addiction, but in general, I have never felt better in my life.

I have cleaned up my diet focusing on whole foods, I still take vitamins but most of all; I am committed to my fitness for the first time in my life. In truth, when I skip a few days due to travel, my body aches again.

It is the stretching and strength training that my body craves and truly heals from!

So I know you might be saying, “this all sounds good, but I can’t do it.” My problems can’t be fixed or it’s too difficult to change. And I say to you, okay then, sit and suffer. I’m not here to strong arm you (no pun intended), my job is to inspire you and tell you that you can change the misery – if I can do it so can you! It takes a mental shift and that’s what this program is all about. It works if you do the work and for most, they find this process to be fun and oh so enlightening and freeing!

With this program I teach you:

Now you may say, “Yeah, I workout but I always quit.” I don’t have the time for this work, I can’t stay focused. I’m too far gone…

I get it! I had come from your same belief but it is not true. Maybe you have that same inner voice telling you that it doesn’t have to be this way, you don’t have to be miserable, you CAN keep commitments to yourself and if you do, I can tell you that you are ready for this program and it is waiting for you. If you don’t believe, you don’t think it will work, then you are right. What you are telling yourself right now as you read all of this is true. It is true for you right here and now. It is the story you will tell yourself until you have had enough and that’s okay. We are all on our own journey, be content with where you are and what makes sense to you in the moment.

In my experience a lot of that stuff is only true in our minds. When we learn how to change our thoughts around our illness, injury, or failing health, we become empowered to know the truth about what our body is capable of “being”.

Join LIFT Your Language to shift your self-talk and transform your life emotionally, mentally and physically!